Frequently we cannot rely on our own judgment or logic when we are trying to make a major change in our lives.  This is especially true if it involves an addiction.  The addictions that I am talking about can range from an addiction to watching television or eating junk food to an addiction to alcohol or drugs.  Learning to be your own drill instructor may be the technique that works for you.

During any transition, your mind and body give you messages that are inconsistent with the new change or habit that you are trying to establish.  It’s like there is an internal battle going between the old and new habit.  Your mind and body only understand the way that you have programmed them to behave through your repetitive actions.

When you are trying to make a change, your mind and body keep trying to return to what it has come to know as normal.  Your mind and body can be quite insidious and tenacious in their attempts to return you to the status quo.  You’ll get mental and physical signals that beg you to return to the old behavior.  That’s why you can’t completely rely on your own judgment or logic during major life changes.  It’s very difficult to keep your eye on the ball without extreme determination or using some sort of technique to keep you on track.  The technique must almost trick your mind and body into going in the new direction until they become accustomed to the new habit.

In other words, you give yourself non-negotiable commands based on how you’d expect a life-changing drill instructor to behave.  One that could push you to make changes in yourself that you have only dreamed about. One that in the end, after all the pushing and uncompromising demands, you end up loving for what they helped you to conquer and become as a man or a woman. 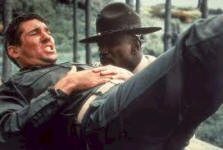 Like in the movie, “An Officer and a Gentlemen,” Richard Gere’s character was initially relying on past bad habits and behavior patterns to get what he wanted.  His character had developed a way of living that was incongruent with what he truly wanted to become.  His drill instructor in the movie, played by Louis Gossett, Jr., pushed him beyond his old sleazy habits and behaviors and in doing so help him become a true officer and a gentlemen.

We can do the same for ourselves.  First, we must decide exactly what we want to become.  Then we must identify which bad habits we need to give up to reach our goal.  For example, if we want to get our body into a trim, firm, and fit condition we must give up any bad habits like eating junk food, smoking, and excessive drinking of alcohol.  Then we must create new habits such as eating healthy foods, exercising regularly, and avoiding or quitting alcohol.

The commands that your internal drill instructor gives you are the ones that you imagined they would give in every area in order for you to achieve your goal in the most efficient manner possible.

Let’s say you want to get yourself to get up at 5:00 AM, exercise for 30 minutes, eat a healthy breakfast, and then go to work on reaching your goals without procrastination, excuses, or fears blocking your progress.  To do this you don’t listen to your old mental and physical script, but rather you listen and respond to your internal drill instructor.  The internal drill instructor that you’ve established, committed to, and entrusted.  So instead of deliberating about getting out of bed at 5:00 AM or arguing with the physical cravings of your old bad habits, you respond to the commands of your internal drill instructor.  And you do it without deliberating, negotiating, or reasoning with your old self.

Scientists have found that it takes about 21 days to create a new habit.  The creation of any new habit requires effort.  Admittedly, some habits like smoking, drinking, and drugging have a greater physical hold on your body, but even giving up junk food involves some measure of physical withdrawal.  But when it comes right down to the basics of giving up a bad habit and creating a new one the process is very much the same.

Take the bad habit of procrastination.  You can analyze why you procrastinate and study what techniques you could use to overcome it to infinity.  Do you think a drill instructor would allow you to procrastinate on ANYTHING for even a second?  Do you think it would benefit you in any way if he or she allowed you to ponder the challenge before you for a few minutes, hours, days, weeks, months, or years?  Have you done this on certain issues in your own life?  If you use the internal drill instructor method there is no procrastination on ANY issue because you don’t follow your past excuses or fears, you respond to the non-negotiable commands of your internal drill instructor.

You can use this technique in any area of your life.  I’ve used variations of it to establish daily habits of getting up at 4 am, exercising, and eating healthy foods daily.  I’ve also used it when I am changing course in my life or taking on a new challenge.  All of these are a form of habit change if you think about it.

Give the drill instructor technique a try.  I suggest that you start with a simple and straightforward habit change like becoming an early riser.